My husband and I have made the difficult decision to move across the country from San Francisco to Chicago. We feel it will be best for our daughter to be near other family members, and I look forward to having my family's support around me. We are scared, but confident this is the right decision for us.

We are concerned about my husband maintaing some type of healthcare. He can't miss doses of his medication, but we will have a lapse in insurance coverage so I think we'll find ourselves in the position many people find themselves in...needing access to healthcare at a reasonable cost.

We are also concerned about encountering ignorance and prejudice due to our HIV affected family dynamic. I don't think we'll tell many about my husband's condition, but I can foresee inwardly cringing when people make inappropriate comments about HIV, such as this sign on a condom dispensing machine in Chicago. 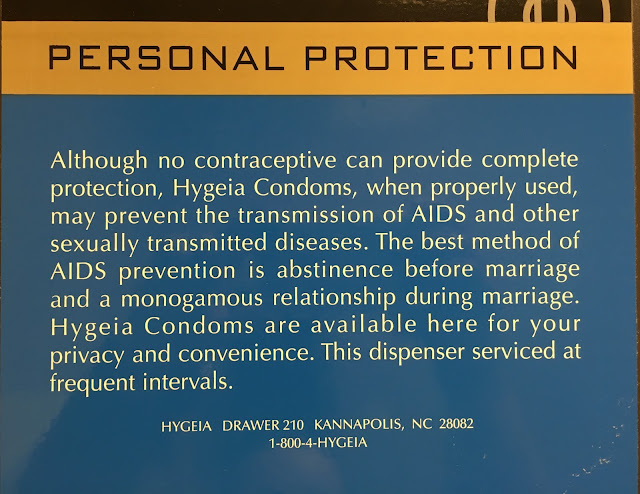 I mean, first of all, no one transmits AIDS...its HIV which progresses to become AIDS if left untreated. And, no, the best method of AIDS prevention is not abstinence before marriage nor is it a monogamous relationship during marriage. This is such a patronizing and ignorant statement.

My mom and dad are thrilled that we'll be closer to them, but I worry about how uneducated they are about things related to HIV and treatment. My husband has psoriasis, and I can see them thinking that his irritated skin patches are the beginnings of Kaposi's Sarcoma. I know they will say things, with ignorant sincerity, that will be hurtful. And I want to react with love, compassion, wisdom, and grace...for my daughter's sake. I hope I'm up to this task of bringing their 1980's AIDS mentality into this age of treatment as prevention, and educating them about all the medical advances and knowledge that is available to us today.

In the meantime, I'll be ovulating next week, so who knows....maybe I'll get pregnant!

Lots of changes coming our way, I'm grateful for all of you who wish us well, and have been part of this journey.
Posted by poprock at 12:38 PM 3 comments:

Take a look at this image. If you want a better look, click this link.

You may remember a few blog posts ago, I said that I wanted to see one of my husband's HIV infected cells. I talked to a doctor about it, he told me that it would be difficult to see, but even if I could see it, I would probably not see HIV in his cells since his viral load is undetectable. He said something to the effect of "His cells would probably look similar to yours."

But I still wanted to see HIV. So, I came across this image. And I have all kinds of feelings that come up for me when I look at it.

First, you know how you are not sure if you want to look at something....like if there was a "GRAPHIC" warning on it, you might hesitate for a split second and ask yourself, "Do I really want to see this? Am I prepared for what I might see?" And then you go ahead and look at it to find it is much more horrific and disturbing than you thought. Well, that's my first feeling.

I stared at this image, wondering why I was having all kinds of feelings. But I guess its just because the image depicts something so violent. Then, I found this video showing a cell to cell transfer of HIV (scroll down the site's page to get to the video).  I found it to be very disturbing, so just warning you.

Its as if the HIV rapes the cell, takes its power, and then makes that cell turn around and do the same thing to other cells. I use the word "rape" because it seems savage, abusive, offensive, dominant, destructive, and humiliating. And doesn't it seem like the healthy cell is desperately struggling to get away? Trying to save itself?

It makes me angry that this is what happened inside my husband's body just about 20 years ago, and what would continue to happen if he was off his meds. I hate that such violence takes place in his body on this micro level. I feel angry at how unkind HIV is to him. I wish I could jump in and stop it, but I can't.

I'm grateful that his medication essentially over powers and outwits the HIV which bring health and vitality to his life. But I still can't help but feel upset. I've finally gotten to see what HIV looks like...and its not pretty. Fuck you HIV. I hope you die.

In 2009, I asked my primary care doctor if she would prescribe PrEP for me so that I could conceive a child. Her answer was a devout NO. You can read my blog post about it here.

With the recent articles, videos, and book on our story and the subject of PrEP for women, I often wonder how that doctor feels about my story today and the role she played during the journey.  Would she still say NO today? Does she feel vilified?

I can certainly see the reasoning for her initial refusal to prescribe PrEP for me.

She was a primary care doctor, not an HIV specialist, and the global discussion on HIV and prevention options were not as "mainstream" as they are now. Even today, I imagine a lot of primary care doctors are not up to date on their information regarding HIV prevention strategies (other than condom use), but we are hearing more about it in the mainstream than we did before. It was 2009 when I talked to her about prescribing PrEP.  The iPrEx study didn't announce its findings until late 2010, and PrEP wasn't approved as an HIV prevention tool by the FDA until 2012.

I don't fault her for not wanting to prescribe me something that was not yet approved by the FDA. But, I resent her judgmental tone, and lack of dialogue on the subject. I feel the responsible thing would have been to have a discussion with me about resources or alternative ways we could get pregnant, I was just too upset to push for this discussion with her at the time.

I wonder if deep down, she might have thought that our wanting a child was selfish and irresponsible. People write these sort of things to me all the time in the blog comments, I don't publish them because its such an ignorant response, but through my blog, I know first hand that a lot of people feel those with HIV don't deserve a chance at love, or parenthood.

I wonder if she's read the articles and book or seen the videos.  I wonder how she feels knowing that I was able to achieve my dream. I can only hope that she's learned not to stand in the way of someone else's dream.

The medical field is so prescriptive and scientific that, at times, it doesn't allow for humanity. If she would have taken a moment longer with me....asked more specific questions, I know her and I could have found a way to have a heartfelt conversation about my desire to have a baby. Doesn't mean she would have changed her mind, but we would have connected on a different level...a human level.

I've had the wonderful opportunity to speak to medical providers in classrooms and on panels and I always remind them to really listen and connect with their patients. Doctors connecting with patients on a human level is so important. It builds trust. It allows for patients to process their own illness, or a family member's medical condition. It allows a doctor to see links or patterns of behavior, to get a "hunch' that could lead to completely different diagnosis. It helps us hear each other, understand each other. It makes doctors better doctors, and patients better patients.

And at the very least, it makes us human...and don't we all need a bit more human connection these days?
Posted by poprock at 12:22 PM 1 comment:

PrEP on the way!

About two weeks ago, I went to an appointment to see about getting a prescription for PrEP.  I kept putting it off, thinking that if more time went by, I would become comfortable with the idea of unprotected sex to conceive without PrEP.  But I couldn't get comfortable with it, so to the appointment I went.

I was scared that I'd have another experience of the doctor refusing to prescribe it, and then hurling ignorant judgmental statements at me for even considering having unprotected sex with my husband...PrEP or no PrEP. But if we want to have another baby, then I'd just have to deal with whatever came up at the appointment. So, I called and the woman who answered seemed a bit rushed...I told her I'd like to make an appointment with the Dr. She asked what was the nature of my wanting an appointment. I said, "I'd like to get a prescription for PrEP."

Suddenly I was aware of my pounding heartbeat, and held breath, waiting for her response. She said, "Oh, you can see the Physician's Assistant (PA) for that, we can get you in sooner that way." Oh my goodness. The relief. The acceptance. The lack of judgement.

As the appointment date drew closer, I began to have a fear that I would seem out of place in the waiting room.  You see, this doctor treats many HIV (and non-HIV) patients in the Castro District of San Francisco. I thought I'd be sitting in a room full of burly men with large mustaches, tight leather pants, and studded black boots. And they'd all look at little ole' me and wonder what in the hell I was doing there.

But, the patients in the waiting room all looked "normal." And I realized...how judgmental of me! What is "normal" anyway?

Needless to say, the PA ordered some blood work and then told me if all is normal on the blood work, she will send the prescription electronically to my pharmacy. She made sure I knew to take it every day, get blood work done every 3 months, and to be aware of side effects.

As I walked out of the office, I felt relieved that it went so well, and once again realized that the fight to have a baby with my husband was behind me...
Posted by poprock at 11:54 AM 4 comments: